Signs often give direction, suggestions, information needed to get from point a to point b. In my case, the signs I encountered on my way to the sheet of ice I was about to attempt to ascend at the Michigan Ice Festival in Munising said run the other way.

It started with my travel buddy being sick. She alerted me the day before and while it would have been easy enough to cancel the trip, we decided to go anyway. It was sunny skies and temperate weather in Iron River. A few hours later, as I drove over the Michigan border, visibility was deteriorating quickly. Within an hour, plows had abandoned all hope of keeping roads clear leaving us nothing but marginal trail tracks, rumble strips and snow covered signs guiding us through the UP. By the time we hit Marquette, even my well-trained winter driving skills were maxed out.

We fueled up at a UP favorite—Donckers. Walking down Main Street headed to get our fill of chocolate, I couldn’t help but question my sanity. The road was shutdown and packed with several feet of snow in anticipation of an evening sled dog race scheduled to take place in sub-zero temperatures. We didn’t hesitate to tromp over the barricades and snow piles for our caramels. 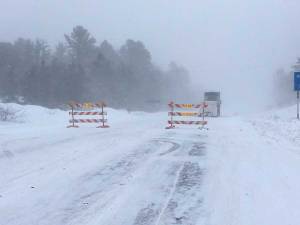 But, perhaps the biggest sign was the one I almost hit (literally) on our final leg of the journey. MI-28, the main interstate between Marquette and Munising, was closed. Somehow, I missed the sign notifying me that this main artery was no longer passable. The barricades, while barely visible, were hard to miss. Did I mention they were placed nowhere near a detour as well?

Did we turn around? Absolutely. Did we head home? Absolutely not. Instead, we navigated our way through the back roads of the UP. At first, we thought the steady stream of hazard lights approaching us was a funeral procession. We later learned, this was common during white out conditions in Big Snow country.

The signs didn’t stop here. Once in Munising, temperatures plummeted. Even the hardcore climbers were talking about how unforgiving a cold, winter day in Munising can be for folks heading out. Rather than wimp out, I just put on another pair of pants. There was of course the embarrassing gear check-out moment where I had to point out that my supersized ass would not in fact fit in the harness designed for the normal climbers body type. After several attempts and a lot of wriggling around, I was told I was equipped with straps that’d withstand me falling from a cliff.

And then there was the trek -in. Did I mention there would be an uphill climb in a snowy, ice-covered trail full of steep ledges? Or, that I wasn’t aware of said trail and had an extremely top heavy backpack on me that was packed with shoes (yes plural), coffee, snacks, extra clothes, 3 cameras and other miscellaneous outdoor gear.

The first time I fell over on an uphill incline, I questioned whether I’d get up. Like a turtle straddled on its back, I somehow waddled my way up the hill. There was of-course the embarrassing and somewhat frustrating attempt to secure my crampons while sporting 4 layers of clothing. But somehow, despite all of these signs, I soon found myself at the base of a 40-foot cliff with only one way to go—up.

We were handed some pick axes and given some basic instruction on how to ice climb. It seemed as though the ice hated me. If I swung hard, the ice shattered. If I swung delicately like our instructor, the pick ax ricocheted back at me, threatening to take my eyes out. This didn’t seem promising. But again, I ignored the signs.

My girlfriend and I were in an intro teaser course. Our instructors were awesome. One was from Salt Lake and a rep for Black Diamond. The other, a world cup ranked speed climber. (Yes, that’s a real sport and she is an amazing athlete). They made climbing look so easy. They provided serious encouragement and didn’t scoff as I fumbled about like an idiot.

Given the time limitations of our course, we only got two chances to climb. And, despite the our class title has intro in it, most of the guys in our class had climbed before. The gals, while less experienced, were primarily rock climbers. I am neither. We lined up like little soldiers, each taking our turn at the base. When it was finally my turn, I clipped myself to the rope and climbed. And fell. And climbed. And fell. Even though I knew that each time I slipped off the icy rock or my pick ax gave way, I wouldn’t in-fact plummet to my death, my survival instinct screamed what the F**** do you think you are doing? I managed to ignore that voice and kept trying. Progress was slow but progress just the same.

Did I make it to the top? Absolutely not. Did others? Absolutely. But, I’d be willing to bet our experiences were equally as scary, exhilarating and frankly fun. There I said it. Despite all of these signs and obstacles, ice climbing is a pretty big high. If given the opportunity, I definitely would have kept trying to get to the top. And, knowing the stubborn Fin in me, I would have at some point made it. In hindsight, I wish I had taken two days of classes so that the second go around I’d maybe experience more success. Who knows, I might even go back next year. It is unlikely the weather or road conditions could be any worse.

For everyone curious to know how high I went… I honestly don’t know. The Go Pro was stopped about 10 seconds into my first climb and I later realized I had nobody take shots on my second climb. I don’t want to pull a Paul Ryan on his half-marathon time or a angler’s tale of the big fish by exaggerating my climb, so suffice is to say, let’s just say I went high enough. The second time, I climbed even higher. But, by far the hardest part of the climb was getting to the base.

And, I’m just happy that in total, the only real casualty of the day was my snow pant leg that got shredded by my crampons when I tripped attempting to pose for a group photo.

That evening, I had the opportunity to listen to keynote speaker Tim Emmett. An athlete for Mountain Hardware, he redefines adventure. I loved his presentation and the photos and videos to accompany it were spectacular. In his presentation, he mentions that life is what we do before we die. It sounds stupid but it is so true. So much of life is about the unknown day-to-day stumbling we make trying to navigate this thing called life.

Afterwards, Aaron Peterson premiered The Michigan Ice Film. It was an enduring combination of extreme ice climbing and the people and culture known as the UP. Peterson did an awesome job intertwining the two to create a solid story line amongst a backdrop that only Michigan ice can provide. Two thumbs up for sure.

At the end of the day, I loved my experience at the Michigan Ice Fest not because I was good at ice climbing, discovered a hidden talent or because it changed my life. Instead, I love that this festival and instructors opened my eyes up to the fact that I can in fact climb, even though every sign along the way said I couldn’t.

Sign up today for my free e-newsletter Rural Ramblings!