To say I was skeptical is an understatement. This introvert does not embrace large crowds. I struggle to strike up conversation with strangers. Nothing about me would seek out a crowd of thousands. So, when the announcement of RISE Fort Myers came across my newsfeed, my instinct was to scroll. Only I didn’t. Something caused me to pause. I clicked. And that quickly, a spark had been ignited in me that couldn’t be put out.

The antagonist in me fought back. I hesitated, assuming tickets would sell out and that’d make the decision for me. Then, I could tell myself it wasn’t meant to be. But, that didn’t happen. Rachel’s marketing had hooked me and seats were available.  Each day her conference would show up in my feed beckoning me to hop on a plane and head due south to see if I could rediscover my true north. Rachel won. For the first time in my adult life, instead of beating myself up over why, I let myself say why not.

I’ve never attended a personal development conference.  I’ve always aimed for perfection but my journey has been in isolation and generally involved higher education. I had no idea what to expect.  So, I did what any Gen X introvert would do…I researched the hell out of Hollis and RISE because if I was going to make this investment, I was going to make it count (Yes, I’m the girl that was irritated when I got an A- in my MBA program). I read the books, subscribed to the podcasts, watched the Rach and Dave Morning Show and devoured the documentary. I quickly accepted that I’d be traveling thousands of miles to dance like an idiot, share scary secrets with strangers, and attempt to navigate Florida’s interstate with Siri as my co-pilot. I was scared but prepared.

I went all in on day one. I showed up early and chatted with strangers. I drank the water and set my intentions. And, I danced. Oh did I dance. This country bumpkin jiggled and strutted with a total of zero rhythm and patted herself on the back for ‘keeping it real’. By the time Rachel hit the stage, I felt like the gold star student ready to show myself that I was so together that this conference was just a brief respite before returning north and resuming regular scheduled programming.

Then, we unpacked. We unpacked and we unpacked and we unpacked. And, just when I thought we couldn’t unpack anymore, we unpacked some more.  We talked trauma. We stood up for our sisters. We talked triggers. We talked habits, good and bad. We dove into body image and the 10 bod commandments.  I soaked it all in. I cried. And I cried. I took notes. I was present. I put away technology and let the words soak into my body. I checked my traumas off on a sheet one at a time, at peace with knowing that while those things happened to me, they did not define me. Years of therapy had paid off.  I was feeling good, right until I wasn’t. 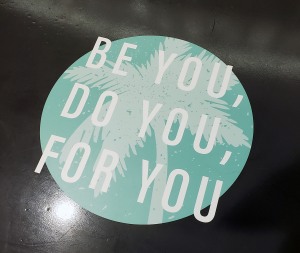 I didn’t know going in that a single aha moment would trigger so much baggage in me, that I’d want to reframe my entire life. Yep. Rachel Hollis went there. What past experiences have shaped your perspective on life?  What if that perspective was wrong? What if you took time to do something about it? And, let’s just keep going, what if you took a minute to understand what triggers the bad habits so that you could do something about it?

Newsflash – I’m over weight. Because I eat too much, sometimes, right? But, I try to conquer that with super healthy habits like running half-marathons. Unlike so many other runners, though, I’ve been running for 9-years and have completed over a dozen half-marathons and gained weight.  I never understood why I’m doing all of this work on myself to do this race but yet am not motivated enough to lose the weight. My inner answer has always been you need to try harder. But damn Rachel and her ability to push us past surface level answers. The truth is, NONE of this was about losing weight.

The reality is running is really hard at my size, especially since I don’t train properly, and despite finding the strength to finish, I never feel amazing after a race. I run half-marathons to inspire other folks and because I put it on the stupid internet my pride says, you better cross that finish line no matter what. Because, YOU show up for people. I don’t know who these people are but I show up for people.  And, I’ve managed to find the joy in finishing last and failing and telling myself it is ok to not be perfect because that’s the lesson I wanted to spread for those people.

But here’s the problem. I DON’T show up for myself in those races. I don’t take care of my body leading up to those races. I don’t invest the time in meal prep or blessing my body with healthy food or stretching or doing any of the things runners do to care of themselves. And, because of that, I’m ok with running. It isn’t selfish or about me, it is about them so that’s ok.

And yep, just like that the trigger hits. Twenty-two years ago I got in a fight with mom about laundry. She’d been sick for 4-years and I was tired of doing everything for her and so for the first time ever, I exploded at her. I told her she could get her own laundry from the basement. And with all the drama of an 18-year old with a license and car I stormed off and went to work…. Ten hours later my uncle was driving me to the hospital so I could say good-bye. By the time I got there she was unconscious. She’d die the next day. And for 23-years, I’ve been trying to make up for that moment by showing up every day for everyone else. If I could just keep showing up for everyone else in the world, it’d be ok.

I had processed in therapy and understood that my mama knew I loved her when she died. That it isn’t my fault she died. But, I never took the time to understand how that single action would reshape my perspective on what I call being a good person. The truth is, it is the most selfish thing ever because when I don’t show up for myself, it shows up as all sorts of crazy in my day-to-day life. It shows up as eating fast food for convenience versus prepping healthy meals. It shows up as binge watching Netflix instead of moving my body or spending time with my family and friends. It shows up as me being short with my husband because he’s trying to help and doesn’t he get it, I help people, they don’t help me. It shows up as me juggling twenty-seven things like so many mamas I know only to say, what this, no problem… even though I’m a mess inside. It shows up as me making myself smaller so I can fit into the life my husband has made for us versus the life I want for myself. It shows up as me investing time and energy in things I don’t love but think I should love. But, something changed this week.

Right before my flight took off this week, my dad landed in the hospital. He’s been on and off sick for about a decade now. My gut screamed, you better stay, because what if something happens? I struggled with what to do. I waited for someone to judge me or give me the fuel to stay. For someone to say, wow, are you sure you should go on that flight? But here’s the thing, nobody said that. Everyone said get on that plane. Everyone said go and have fun. Dad will be here when get back. And, thanks to trip insurance, I forced myself on to that plane because I could always fly home. And, if I’m being totally honest, I hopped on that plane for them because I didn’t want them to think I couldn’t do it. As soon as we were in the air, I second guessed my decision. But, it was too late.

I sat with this guilt while Rachel talked about trauma. I danced with it. I mulled about it back at my hotel room alone. And, when we talked about triggers, the light bulb went off. My trigger isn’t a fear of being abandoned but a fear of abandoning someone I love. A fear of not being enough for them. And, so every time I let someone else down in my head, I’m triggered. Because for years, I’ve been telling myself that while my mom loved me, I let her down that day I stormed out over stupid laundry. And, if I could just double down and never let anyone down, I’d make up for that day.

Here’s the problem – my bar is high. I expect myself to show up perfectly for people every time. They don’t, but I do. And, given I’m far from perfect, I fail A LOT. So I’m triggered a lot, which then makes me feel like I didn’t show up for them, which triggers me to double down on my investment in them versus my investment in me. I honestly believed if I just showed up more for them, I’d be a better version of myself.  But am I? No. How sad is it that others believed in me more than myself—that it was because of them I got on a plane to work on myself.

The conference ended with the future. To understand that at any moment we can make the conscious choice to show up for life.  That’s step one. Then there is the work. The really, really hard part of actually doing the work to live the life you want. That scares me. And is the thing that I need more than ever. So my word of the year is grace. Because this all or nothing approach to perfection or curling up and being small – yeah that doesn’t work for my anymore. That I know that to be me, I’m going to have to give myself and those around me some grace to figure it out. And so, 2020 will forever be remembered as the year I stepped up to the plate but gave myself some grace to show up as me.

My goal is to tackle health, one step at a time. This may culminate in a half-marathon but only if I’m willing to invest the time to do it right. To see what I’m really capable of. My ten year dream is to know I could complete a 12-hour Trail Ultramarathon strong if I wanted because I am truly healthy and whole.. which means I’d run the Ultra for me and nobody else, but only if that’s STILL my dream. To do that, I need to channel some Lindsey Vonn and rediscover the big, bad ass I used to be.

Lots of folks have asked me if attending RISE is worth it. They’ve asked for the down low and whether this is something they should consider. It depends. It depends if you are open to the idea that you are worth more. If you are open to putting yourself first or making the investment in not changing yourself but acknowledging your worth. (And, if you’re willing to release your inner dance moves because you won’t get away with not doing this). This conference didn’t change my life but it reminded me that I am blessed with a life that’s worth living. And, that’s an investment I’m ready to start making every single day.